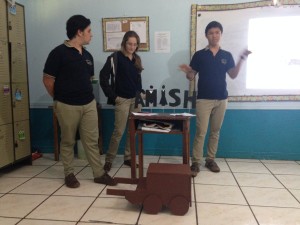 Students in 9th and 10th grade English classes in Colegio Jorge DeBravo, Turrialba, Costa Rica connected with 10th grade Spanish class students in Parkland High School, Allentown, Pennsylvania. The Costa Rican students were already studying different society and gender roles throughout the world and were especially inquisitive about the different societies in Pennsylvania, such as the Amish. These students created a research project that they presented to the class, increasing the classroom knowledge as a whole.

Letters were written on a student to student basis using Google Drive. The students wrote their letters in both languages, to practice in their specific classes. Students were then given the letter in the language they were studying first to practice and then in their native language to translate. A final video chat was conducted among each of the students so that they had the ability to meet their connection and ask a few more questions.